There was no August 2020 session and for this month September I’m announcing the end of the Treasured Teachings series. We are ending with this discussion of the sixth and seventh teachers of the lineage outlined in Shinran’s Shoshinge.

One of the important characteristics of Jodo Shinshu we should emphasize is the repudiation of elitism that is entrenched in much of Western Buddhism. One-upmanship has been a part of human history in almost all cultures and has frequently crept into Buddhist institutions despite movements to return to the Buddha’s teachings of equality. When Buddhism became established in Japan it was the domain of the aristocrats, those who could read and write Chinese texts.

It took a while for the Pure Land teachings of China to make a dent in the Japanese Buddhist consciousness since it was easy to interpret the sutras and commentaries as handbooks to gain spiritual superiority through difficult practices. It was in a Buddhist Churches of America book that I read that the Tendai priest Genshin (942-1017) became interested in the Pure Land teachings because even though he was confident of attaining enlightenment as a learned and disciplined monk, he wondered what chance his non-ordained mother would have. That concern for his mother widened to see the Pure Land teachings as a way for laypeople (of course, for him, it meant aristocrats) to be on a sure path to buddhahood.

Genshin’s importance for us is being an influential enough priest to bring the Pure Land teachings to the attention of serious Japanese Buddhists and eventually to Honen (1133-1212). Genshin appreciated the theory of universal liberation and could see its relevance to his circle of well-to-do folks, but it was Honen who left the Mt. Hiei monastery to put those teachings into practice by bringing them to the residents of Kyoto, rich and poor, upstanding and criminal, authorities and outcasts, and of course, women as well as men. I heard in one of Dr. Mark Blum’s presentations that one of the first groups of people Honen approached were the funeral workers, those considered defiled for their work of handling dead bodies. If Honen could bring them the teachings of universal liberation, there is no one to be excluded, no matter what their work was, what their assigned station in society was. 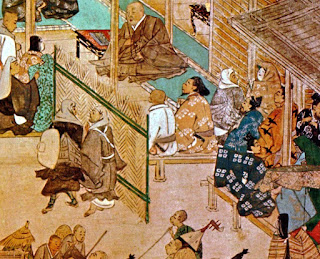 [Honen sharing the Dharma with the townspeople]

What Shinran observed in Honen and Honen’s community was the “rightly settled” – maybe not perfectly awakened but people who exhibited the Buddha’s open-heartedness of embracing all as fellow seekers. Everyone in hearing the nembutsu was being equally liberated from their ego-shells and into the flow of true life – no one had a leg up on anyone else because they had a special talent or won an award for outstanding achievement. Even those who seem to be so caught up in promoting themselves are only temporarily residing in the “womb-palace of doubt” and will eventually find themselves with everyone else in the Pure Land.

At this time in the United States with people so divided politically, it’s hard to imagine such a view of Oneness. Americans seem so entrenched in the idea of individual achievement that we easily disparage those we think are lacking in initiative and morality. It may seem that the Jodo Shinshu teachings will never have any effect in the society we live in but the nembutsu keeps calling to each of us to see what the Buddha saw, the way Honen lived, the truly liberated view of Shinran respecting the buddhas and bodhisattvas all around him.